It’s never easy to break the ice at parties and occasions, especially in the day and age when emojis and gifs make communication far less emotionally draining. So you’re with a new group of people, but you want to know them better, what do you do? You want to know who’s more like you, without being too upfront about it.

It’s hard to gauge a person’s personality objectively, but asking them to choose between two options is a good way to go about it. Playing ‘Would You Rather’ is the best way to keep things interesting, get to know more about people, and find out if your friends are really who you think they are.

Why Play ‘Would You Rather’ and Not Something Else

Truth be told, it’s always a good time to play ‘Would You Rather’, but more so when you’re with new people. Not everyone’s comfortable with other games like ‘Truth or Dare’, so it’s best to stick to easy questions that let them choose the closest possible answers.

What is Would You Rather Questions?

‘Would You Rather’ is a fun party game that needs at least two players to start. It’s even better with more players, but you’ll need to write the questions in pieces of paper and put them in a hat, so everyone gets a chance to ask and answer questions. You can also try using a bottle instead so that it keeps things interesting.

As each person takes a turn to ask someone a question, they’ll ask them to choose between two crazy items, impossible opportunities, or weird scenarios. Although you can come up with great questions at the spur of the moment, it’s best to prepare questions beforehand just in case, because it’s more fun, and keeps the game moving without long pauses when you need to come up with a good enough question.

No one is quite sure who created Would You Rather,” but it’s a fun game where people are faced with two extremely difficult choices. It’s great in big and small group settings and makes for tons of fun, no matter who it’s played with. But finding interesting questions is not as easy as one would think. And that’s exactly why this article is taking all the trouble away by providing you with 100 fun ‘would you rather’ questions. Are you ready to say which you would rather?

Awesome ‘Would You Rather’ Questions

Ideally, you should have a good 100 to 150 ‘Would You Rather’ questions ready. Questions change from time to time, and we stayed on top of the trends to come up with awesome questions in various categories. Have fun getting to know your friends better with these questions.

See Also : How To Manifest Anything You Want in 24 Hours 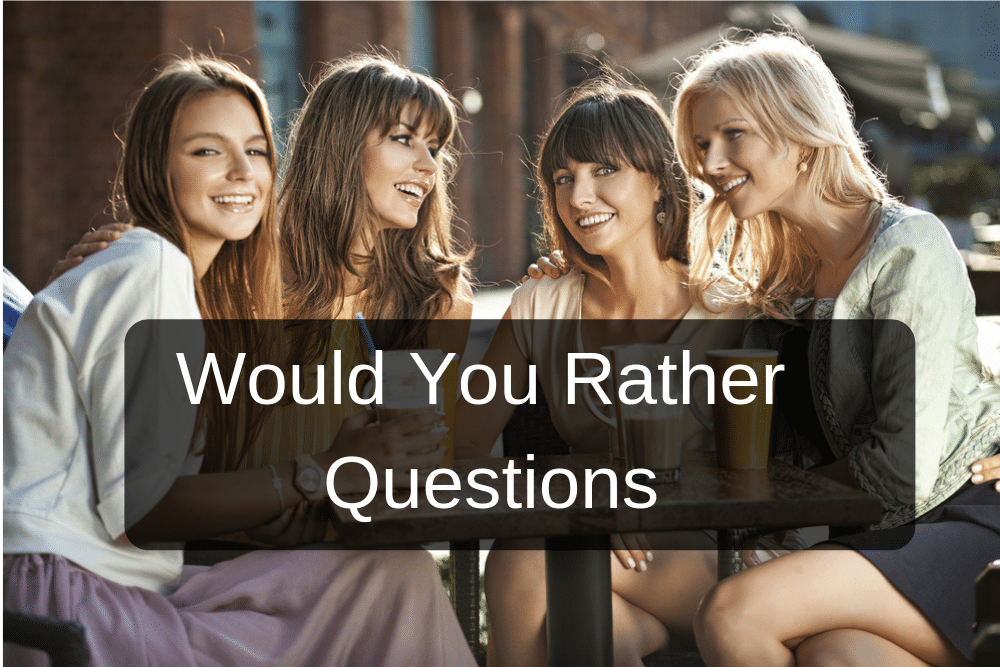 These questions ask the player to choose between two gross food combinations or edibles.

In these questions, you’ll ask the player to pick between two equally weird scenarios and situations, both of which can involve some element of survival.

This category of questions asks the player to choose between abilities and superpowers.

This category adds a twist by asking the player to choose between two awesome instances like vacations or a date with their celebrity crush.

In this section, you can ask the player to choose between different ‘switched’ aspects of their life, body or personality.

Some thought-provoking questions can really boggle your sense of morality and fairness, the same applies to friends. Are your friends as nice as you think they are? Find out with these questions.